ask NASA: What Do Beck, NASA and Artificial Intelligence Have in Common?


NASA's ARIA team, in collaboration with the Earth Observatory of Singapore, used satellite data to map the extent of likely damage following a massive explosion in Beirut. Dark red pixels represent the most severe damage. Areas in orange are moderately damaged, and areas in yellow are likely to have sustained somewhat less damage. Each colored pixel represents an area of 30 meters (33 yards).
The map contains modified Copernicus Sentinel data processed by ESA (European Space Agency) and analyzed by ARIA team scientists at NASA's Jet Propulsion Laboratory, Caltech, and Earth Observatory of Singapore. Based in Pasadena, California, Caltech manages JPL for NASA. more...

Watch history unfold on Wednesday, May 27, as NASA and SpaceX launch astronauts Robert Behnken and Douglas Hurley to the International Space Station. This mission marks the first time since the retirement of the space shuttle in 2011 that humans will fly to the space station from U.S. soil. Tune in starting at 12:15 p.m. EDT as NASA and SpaceX provide joint, live coverage from launch to arrival at the space station. Teams are targeting 4:33 p.m. EDT for the launch of the SpaceX Crew Dragon spacecraft atop a Falcon 9 rocket from historic Launch Complex 39A at NASA’s Kennedy Space Center in Florida. The Crew Dragon is scheduled to dock to the space station at 11:29 a.m. Thursday, May 28. Learn more about the mission: https://www.nasa.gov/launchamerica/
Eingestellt von wolfgang rathgeber um 27.5.20 Keine Kommentare: 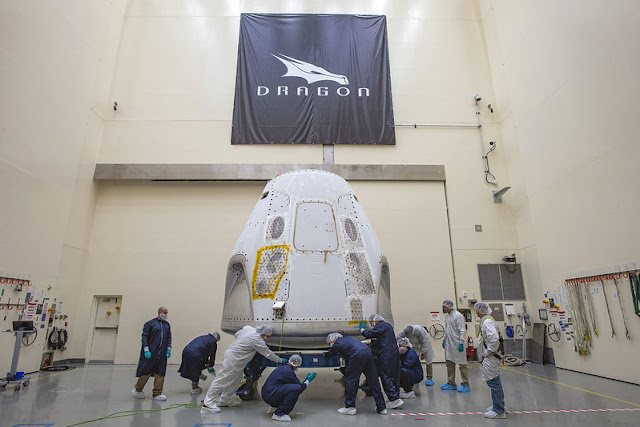 NASA’s SpaceX Demo-2 ‘Go’ to Proceed Toward May 27 Launch; News Conference Coming Up

The Flight Readiness Review has concluded, and NASA’s SpaceX Demo-2 mission is cleared to proceed toward liftoff on the first crewed flight of the agency’s Commercial Crew Program. Launch of the SpaceX Falcon 9 rocket and Crew Dragon spacecraft, carrying NASA astronauts Robert Behnken and Douglas Hurley to the International Space Station, is slated for Wednesday, May 27, at 4:33 p.m. EDT from Launch Complex 39A at Kennedy Space Center in Florida. more...
Eingestellt von wolfgang rathgeber um 23.5.20 Keine Kommentare:

On Sept. 9, 2018, NASA’s Solar Dynamics Observatory, SDO, saw two lunar transits as the Moon passed in front of the Sun. A transit happens when a celestial body passes between a larger body and an observer. This first lunar transit lasted one hour, from 4:30 pm to 5:30 p.m. EDT and obscured 92 percent of the Sun at the peak of its journey. The second transit happened several hours later at 9:52 p.m. and lasted a total of 49 minutes, ending at 10:41 p.m. EDT. This transit only obscured 34 percent of the Sun at its peak.


No one under 20 has experienced a day without NASA at Mars. The Pathfinder mission, carrying the Sojourner rover, landed on Mars on July 4, 1997. In the 20 years since Pathfinder's touchdown, eight other NASA landers and orbiters have arrived successfully, and not a day has passed without the United States having at least one active robot on Mars or in orbit around Mars.
Eingestellt von wolfgang rathgeber um 27.6.17 Keine Kommentare:


Mission to International Space Station coming to an end as Briton and two crewmates begin their descent in Soyuz capsule [more...]